Not a covert artist residency, but further experience of the fact that residencies are all completely different - the time, format, expectations, resources, outcome, and so on. 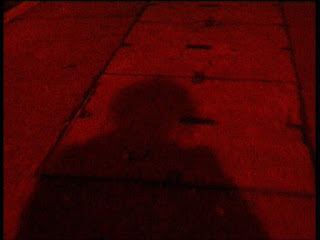 An investigation into the nature of shadows and echoes

When I was a child I believed in shadows. I believed they copied us deliberately, and played tricks on us, the way they stretched out or hid secrets deep within them.

I listened to echoes then, the way they whispered or made the walls call back.
I always thought if I could turn around fast enough I would catch my shadow, like it was an echo of myself.
I thought that echoes never stopped, and wanted to go on listening to them as they got smaller and smaller, like watching a balloon float up into the sky, beyond where it becomes a dot, when you know you are still looking at it, only you can’t see it.

In this short, quite last minute of the year residency, I would like to investigate shadows and echoes, to record, play and project them, to draw shadows with visitors, and to ask them questions about what they believe shadows and echoes are. I would like to get to know the echoes and shadows in the crypt – I wonder if there are special ones there? Can their nature be manipulated? Do they have secrets to divulge? Can I take one of the shadows home with me? Could I frame an echo?

Shadow: a dark area where light from a light source is blocked by an opaque object.
Echo: a sound or sounds caused by the reflection of sound waves from a surface back to the listener.

I aim to come up with better, more fitting, definitions for these mysterious, evocative, nebulous phenomena, something that conveys their poetic and imaginative potential and their subtle presence in our psyche and cultural history.

I don’t know how I can tell you how wonderful it is for an artist without a studio to get to work in such a residency. Space and time to make and think…and what a place…a brick labyrinthine crypt. Just bringing a few things, and letting it all out. 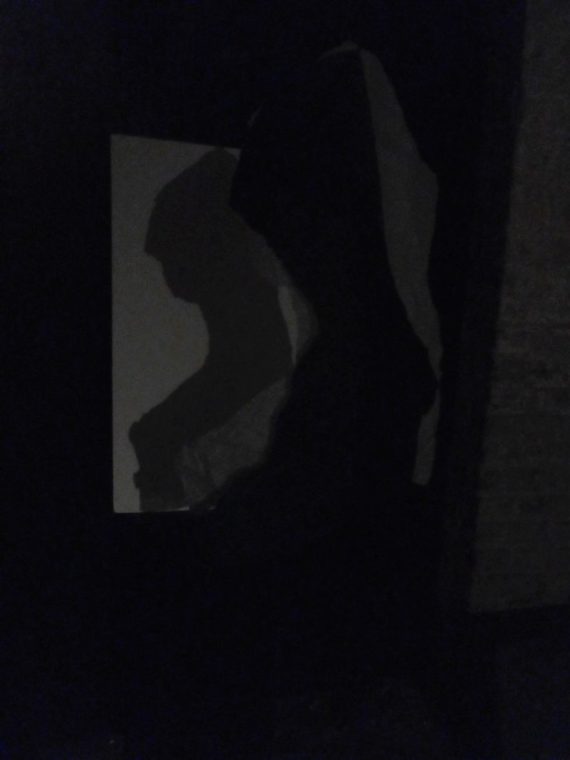 The crypt is cold – dank is the word that springs to mind. Just being able to think about nothing but what I am doing. Having an idea and trying it out. Tearing shadows from tissue paper. Overnight I have left what I hope will become solid shadows drying out. Minimalist stuff when carrying everything there for a few days. Prototype installation – shadow catcher. 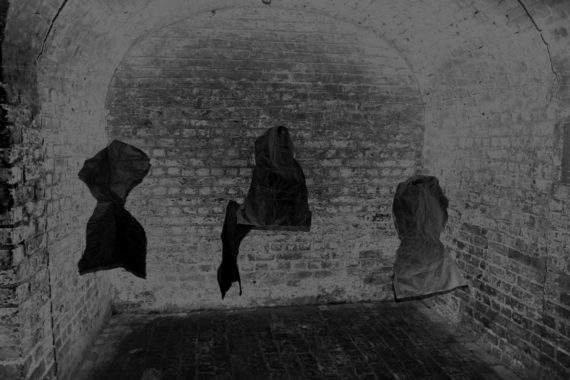 This residency is giving me my ideal working setup with several ideas in progress that I move in between. Down here – the Echoes, not so much – it’s all shadows. I have worked for so long in making positives and negatives, black and white, white and black, that each image is all of those aspects. Also looking a subtle shafts of light as another reverse shadow. The tangled shadows didn’t dry out as I’d hoped, but gave me something else to go with – I have a new obsession to take away with me – tangle-weaving shadow shapes – I plan to get them to stand – black, grey, whites. 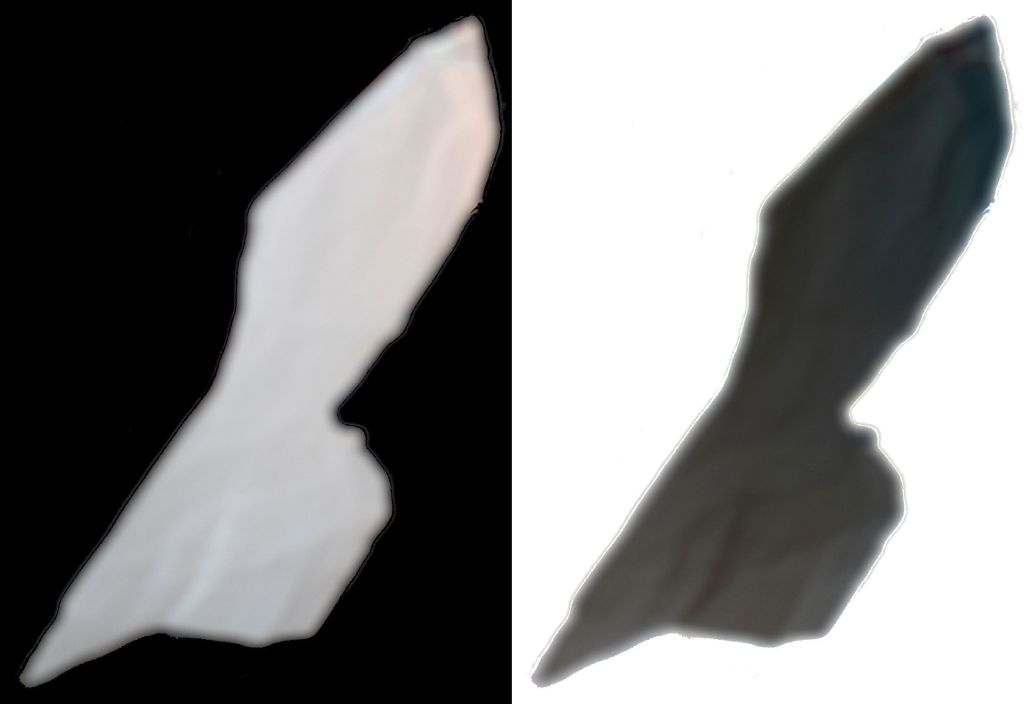 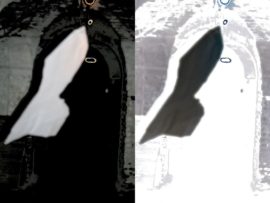 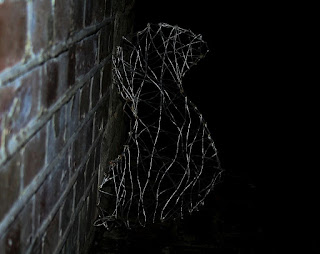 Shadows themselves are like benign creatures, or inert entities. People shadows tend to be hood-like. Perhaps that’s the hood of childhood or adulthood. I thought I might get much more spooked, working down in this crypt for a few days, but there’s that art-detachment, the critical eye that is looking for relationships and trying out ideas. I never make things deliberately spooky, or add an effect for effect – I follow quite a different process. However, I am not unaware that I have hung up hooded shapes in a crypt – nice. These are shapes and trials, and as yet without much deliberate intended meaning. 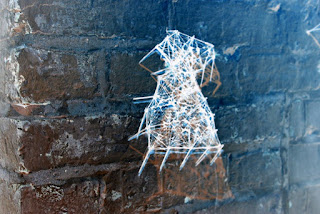 Just one more day to go in the crypt. Probably just as well as it’s a strain on the health. I’ve had a lovely stream of visitors, conversations and a meeting. We had a group crit today – most enlightening. Tomorrow I plan to make a book-like object. Most of what I have made in this residency will be scrunched up – it’s really in the photographs, video, writing, ideas and plans. What I have learned about shadows…. 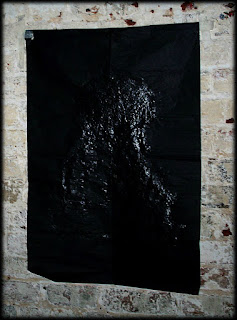 Day 6 in the Crypt residency just before Christmas. With people going to catch trains and the last visitors dwindling, it was left to me to lock up and close down the crypt. All week it has felt ok to be there – atmospheric rather than alarming, benign rather than disturbed. All of a sudden, my imagination jumps out at me in giant loops of alarm, as if all the shadows are suddenly populated. I decide I can leave – right now. There’s not much left to gather up, so I take my bags to the entrance, but I have to go back, into the cupboard, to turn off the main lights, and then into passageways and room to turn switches, leaving a swirling magnetic dark behind me. I pull the slow, enormous door against that blackness, the whole place having changed its nature.

It turns out that a six day residency is plenty of time to go through some cycles of thought and experimentation, to try out a few things, and follow ideas to conclusions. I found it really valuable, to have that precious time and space to think about nothing but what I was doing, and to follow every artistic impulse. Keeping the resources limited helped me to find more shades of meaning in a few sheets of tissue paper and some threads. Taking all those photographs is looking, looking, looking. I have a great amount of material to process in time, and new ideas for exhibitions and proposals and so on. I have a couple of new things which are part of my art practice repertoire – the wrapping, and also the solid standing shadows – solidified. I have some ideas for making wrapped shadow brooches. I will update here in due course.

We revisit the same sorts of ideas in different iterations and aspects, and find new shades or angles, and perhaps new forms, incorporating more ideas along the way. It’s great to get the chance to have some intense time, especially not having an actual studio. I normally write a great deal in such situations or projects, but found this time I was doing, doing, doing.
Posted by Eleanor MacFarlane at 00:35

Email ThisBlogThis!Share to TwitterShare to FacebookShare to Pinterest
Labels: Shadows&Echoes 2016